In just a few weeks i will start my trip from Poland Gydina going south, and Im travelling with my dog and a pretty big trailer. I do feel a little bit worried about traffice and would like to know if anyone here have any recommendations of good bike roads going sout? Im going in the direction of Greece but Im flexible about the rout and want to travel as safe as possible.

Thank you so much :) And please let me know if anyone wants to join, always nice with company, 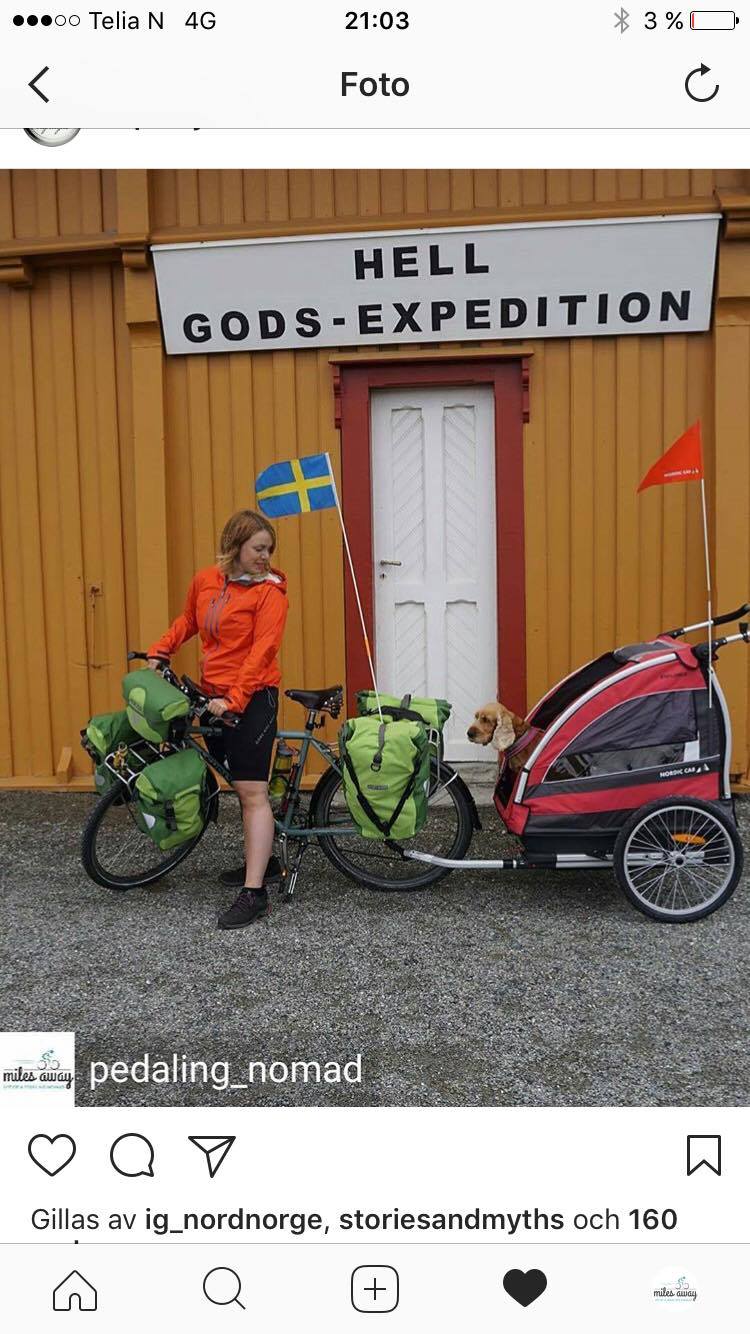 I'm cycling in poland and if you're willing to go east there is a really nice and long cycle trail called GreenVelo and its really awesome, really safe and going through national parks, go check it out! Otherwise avoid as much as possible the big main roads are they are full of trucks, but i still think most of cars pay good attention to cyclists and its not so dangerous. Depend on each person point of view i guess but poland has many roads so you should manage to find small quiet ones (even if the roads are not always in good condition..)

We cycled in Poland in summer. Car drivers usually are considerate and leave enough space when passing you - unless there is oncoming traffic. We would recommend to take small country roads. Their condition varies, but there's usually not a lot of traffic.
If you go south from Gdynia, check out the Vistula cycle path (Wislana Trasa Rowerowa). We found it by chance, even our host in Gdansk didn't know about it :) The part we rode was mostly on quiet roads, the marking was minimalistic but sufficient.

Not all parts of Vistula

Not all parts of Vistula Cycle Path are ready, so please keep it in mind when planning. But as someone already mentioned GreenVelo - very beautifull path, safe path.

I am hoping for good weather for you, fall can be nice in Poland, but the days are really short.  The western part of Poland is generally a few degrees warmer. Usually a degree or two doesn’t matter, but this late in a year, one degree may mean the difference between a frost or not.

As for the route, heading south, I would head to Malbork, Torun, Gniezno, maybe Poznan.

There are a lot of resources on the web. Here are some links I found:

If you take the “warmer” route, we live just north of Wroclaw. My daughter surely would like to meet your puppy! Just click on my warmshower profile for more info.

Here is a rule of thumb road selection guide, may help prevent having to give the finger to truck drivers:

The major Polish roads are alphanumeric: Letter Number, the lesser (and better cycling roads) are single digits, not possessing the alpha, just the numeric, For example:

European road E [0-9] map color red
Motorway (autostrada) A [0-9] red / blue (generally illegal to ride on anyway)
Roads to totally avoid, these are the ones that give Poland a bad name! Most of the roads in red on your maps qualify to avoid. At times you may wish to ride on one for under 10 km to avoid riding 30 km extra. At times there are shoulders.

Fast traffic road (droga szybkiego ruchu) S [0-9], often triple digits, map color yellow, National network
Proceed at your own risk, sometimes these roads are not all bad, use if they can save you more than 10 km. Ok for a short “get me to a better road quick” stint. I ride on a lot of yellow roads and many don’t have all that much traffic. Generally no shoulders.

National road (droga krajowa) 0-9 , map color black National network
Single digit category, 99% paved (more or less), you’ll do much of your riding on these roads. At times have traffic, Sunday when church gets out. Occasional fast driver, horse carts and tipsy cyclists. Sometimes the only major road in the area so traffic can be a factor.

The thin black lines on the map often are great roads, but can be a mix of dirt, cobblestone and a bit of asphalt

There are a lot of dirt roads. Dirt is a relative term. In much of western Poland, the roads can be rather sandy, not much fun really. For some reason, many of the marked cycle paths use these roads, so watch out.

Be aware of roads that are

Be aware of roads that are popular with russian truck drivers. These guys are by far the most dangerous traffic users you can meet on the road in all the countries on your way.

That is rather unfair; I

That is rather unfair; I would not single out Russian truck drivers. Truck drivers of any nationality are something to avoid. Plan your routes so that you do not have to share a road with trucks.

The quality of some (most) roads you can check at 'guugle-street-view' ... it was a great help for some of my trips.

AVOID the mainroads ... Green-Velo is close to perfect but a bit more east. If you go there you should check where you can cross the Wisla-river: the most north option is a ferry - sometimes out of work because of flood. The next option more south is a highway-bridge (S 7): bridge and road are under construction - i had to join the traffic-jam ... wasn´t fine.  Taking the bridge in the city of Tczew would be a good choice i think.

If you need another adventure: try to use the polish railway.

Don´t forget to try to taste as much local food as possible ... you won´t regret

Have fun and enjoy your trip

Ciao!
I've done nearly the same trip one year ago, around the same time (november-december). here is the route https://goo.gl/maps/ed43kgu6FwA2
I can tell you my "going-south" story and give you some tips about roads I visited:
1) Poland - if you are outside of these bike roads that others had mentioned before, voivodeship roads (with yellow mark and three-digit numbers) are OK enough.
2) Ukraine - most of the small-side roads have lots of holes, you need to be very concentrated to avoid all of them, some of them are wide as the road. Normal asphalt-roads, except those with european mark, don't have big traffic, so you can quite easly pass from one town to other (but still remember to avoid holes).
2) Romania, west part - roads with blue mark are calm. Two things to be aware: plenty of homeless dogs and Karpathian Mountains you need to cross (so you need to go up into the mountains, because the one only flat road between mountains is very crowded with trucks). One of the most beautiful and helpful country I visited.
3) Bulgaria west part -  roads there are quite calm. Even when there is the european road from Sofia to Greece, you can take parallel road.
4) Greece - immediately warmer :)  From nothern border to Athens the only quite-flat road is the highway. So be prepared to climb on the small (very calm) roads, or to make (not always possible) "slaloms" near the higway with detailed map in hand. I mean the system of little roads going parallel and near to the highways - it's like a maze, one time you need to be on the left side, one time on the right side of the highway. If you will miss the proper turn, after some kilometers you can find yourself at the dead end.
That's all. I think I didn't choose the easiest way, and to go south there are lots of different options, every of them really interesting and inspiring.
The best in this direction is heading the Sun!

I wish you all the best on your trip,
Greetings for you and your dog!
Ciao!

Enjoy! Your set -up looks terrific.

Your set -up looks terrific.

Your set -up looks terrific.

If you come by Kazanlak (in the middle of Bulgaria) I will be glad to meet and host you and your dog... see my place here on WS.

If you will chose the way Gdansk to Warsaw via Płońsk (70 k North of Warsaw, a day of ride ), I can offer hosting in both, Płońsk and Warsaw.

I am still  ot sure about the destination, Czech or Serbia, depending on volunteering opportunities.

In case i ride to serbia, we could share the same path for a while.

I am still worried about temperature, you post gives me hope!

I am still  ot sure about the destination, Czech or Serbia, depending on volunteering opportunities.

In case i ride to serbia, we could share the same path for a while.

I am still worried about temperature, you post gives me hope!

Don't want to rain (snow) on anyone's parade, but weather in this part of Europe is a serious thing to consider. If I was doing the same ride, i.e. heading south from Poland in December, I would take the shortest route with the lowest mountain passes to the Adriatic Sea. The past two winters have been mild, so riding was not too difficult. For the previous 5 years, the weather was horrible with a lot of snow, even in Poland's "California", Lower Silesia. Plus super low temps.

With modifications, the eurovelo amber route is fairly direct. http://www.eurovelo.com/en/eurovelos/eurovelo-9

Did this small trip 3 weeks ago and I follow the Eurovelo roads see http://www.eurovelo.com/en/eurovelos my experience they are the best plus you dnt have to plan so much...

I don't want to say too much, but I have about 32000 km bike experience on eastern european roads and tracks and truck drivers are my friends - in comparison to car people!

Let me explain: First of all I consider it a MUST to use a rear view mirror! Second: learn to use it! One car is not all the story - quite often a second one follows real close! Using a rear view mirror will give you an idea what the traffic behind has in mind. You will learn to see, if traffic behind you has recognized you and if that traffic is taking care of you. If not, you will have to take care of yourself! One option would be to make it clear to succeeding traffic, that there simply is not enough space for all of you, but be WARNED: there is some risc involved. Some IDIOTS really think, that cars always have priority over bikes!

Truck drivers usually have thousands of hours of experience and they anticipate conflicts. Very often you hear, that they are taking consideration for you (changing gears, slowing down). To make it short: I'm a lot more relaxed, when I see a trucker behind, than a car, simply because it feels good to see them, changing lanes. (I've never been a trucker and I have no trucker friendships).

Well, I only want to give some hints - nothing can guarantee safety, For myself, I always try to actively manage my safety, which means I give it value: I stop, to put on a safety vest, switch on extra lights, avoid car routes if there are alternatives, give myself time, never force myself to do risky things. I enjoy working for my own safety and I'm not a coward, believe me! I would like you to manage your safety, please! Have a wonderful trip!

And don't be afraid - just handle your situations!

Greetings from the road, presently almost 7 months out, going home for winter.

By the way: your picture looks great and inspires me to do something similar, in case my life puts me into a comparable situation!